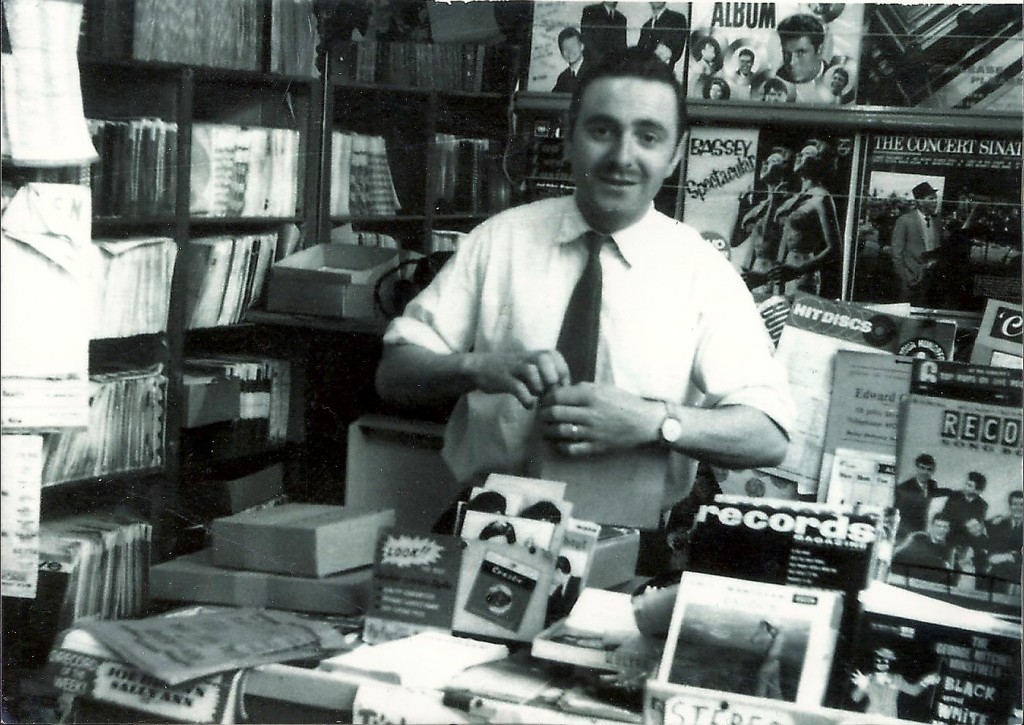 Thank you for your help Denise. 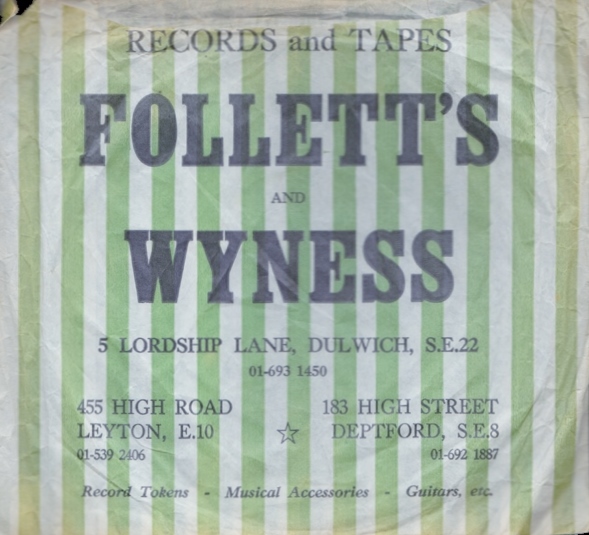 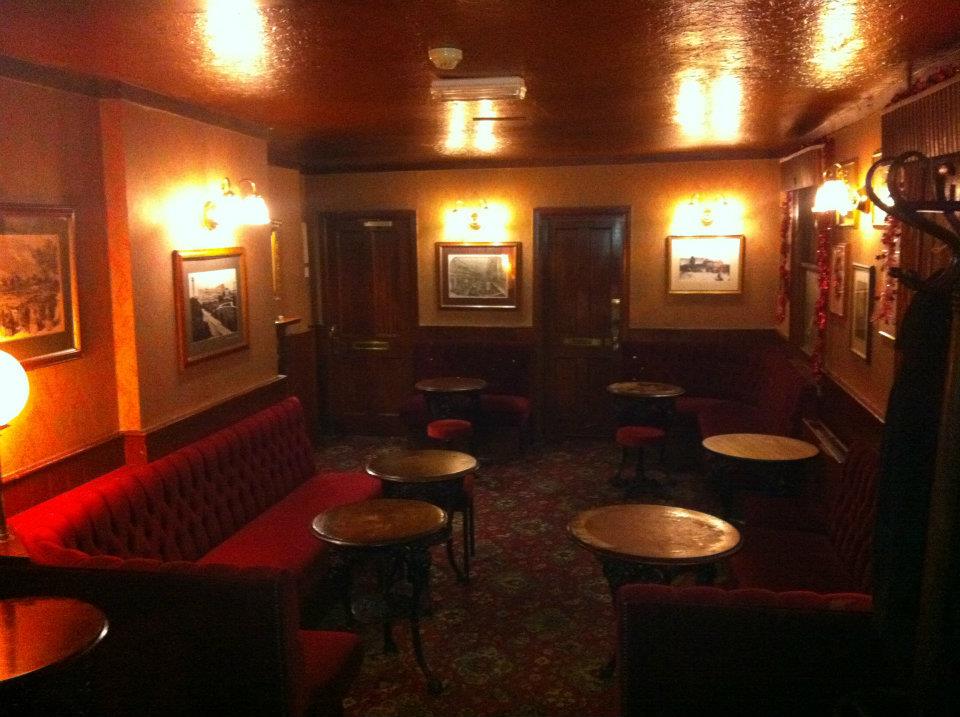 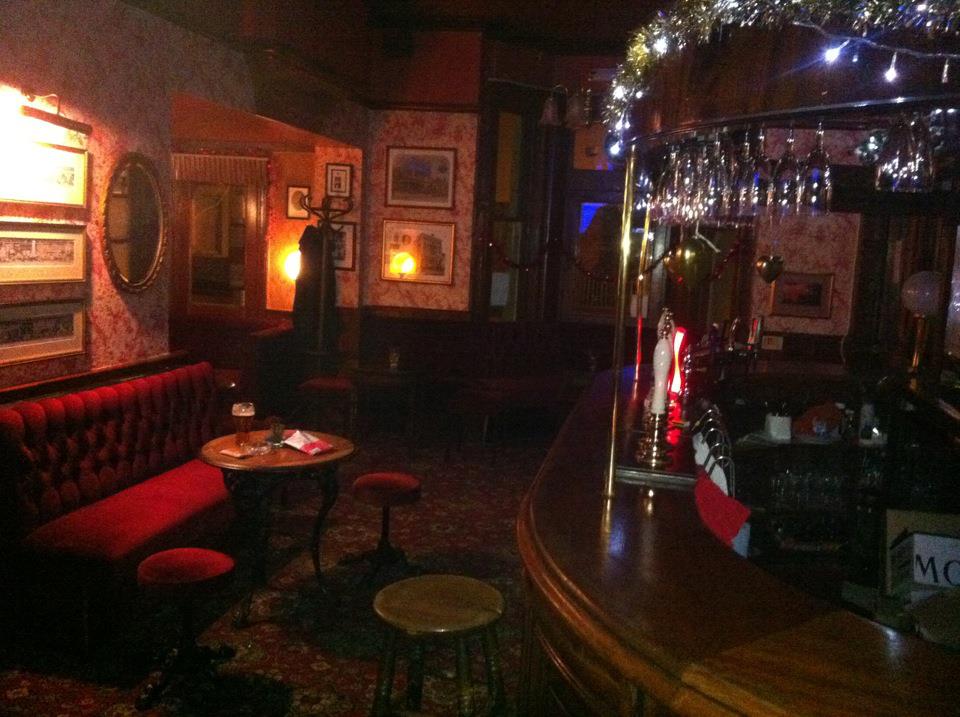 I understand it the pub’s exterior has remained fairly unchanged from how you would remember it, apart from the addition of a patio style raised seating area with picnic benches that stretches around the outside of the pub on Crystal Palace Road and Underhill Road. When the pub changed to be called the CPT this was added and was then redone and neatened up a little when it became its current incarnation.

Some of the older regulars have told me there was at some point a small shop selling crisps, cigarettes etc… where the current main door on Underhill Road is. That’s now gone of course and what I’ve been led to believe used to be some of the many entrances to the pub are now shut off and just windows. There are still three entrances in use, one that leads into the “snug” area where the toilets are, the main one I mentioned with the two doors leading to either the “saloon” or “lounge” and one in the middle of the side of the pub that faces Crystal Palace Road.

The bar itself was moved to its current position along the back wall for the opening of The Great Exhibition in March 2012. The ale pump are all original and play up as much as you would expect for ones that old! Behind the bar we still have the mirrored patterned glass and the curved piece which I imagine used to be around one of the pillars in the centre of the pub. A lot of the furniture is still the same, in fact we had one man who said what he remembers as the dominoes table (long and thin with cast iron feet) is still there and has a part time use as a DJ table!

The pub now has a kitchen and what we call the “Gin Yard” which are in the back of the pub where there didn’t used to be anything as far as I know apart from possibly the back entrance to the quarters on the upper levels. This was all cleared out, a door allowing access from the pub put in and wooden porch decking and a covered area put in for smokers. 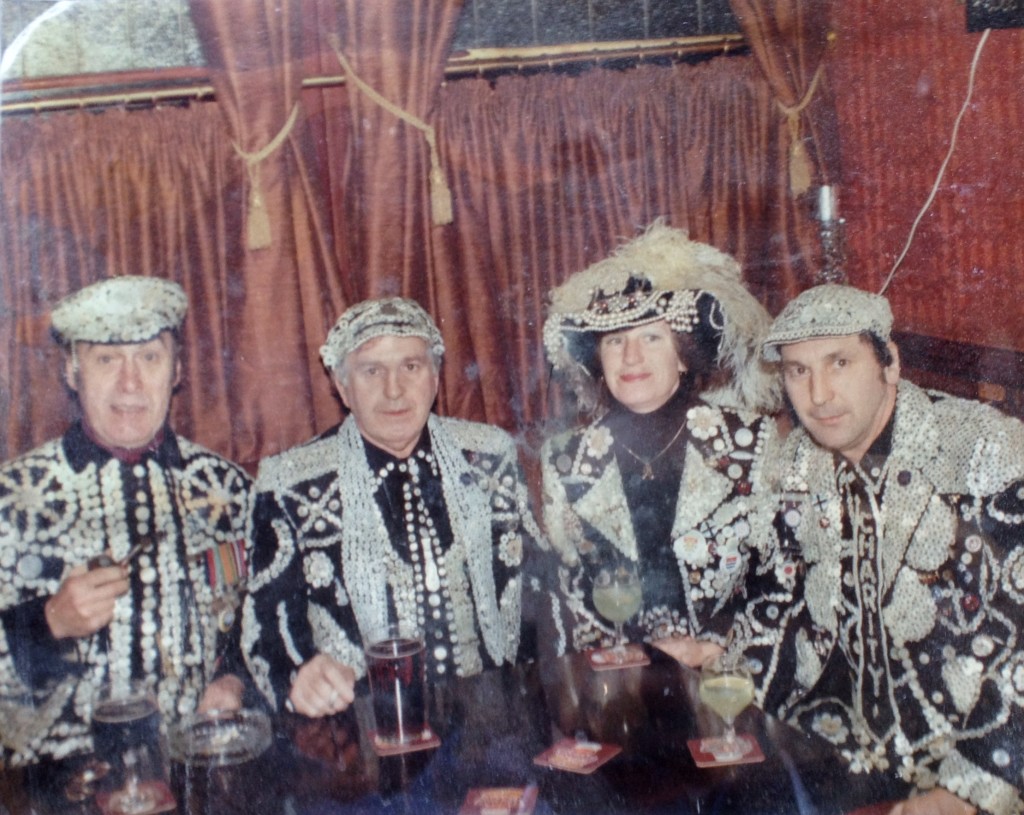 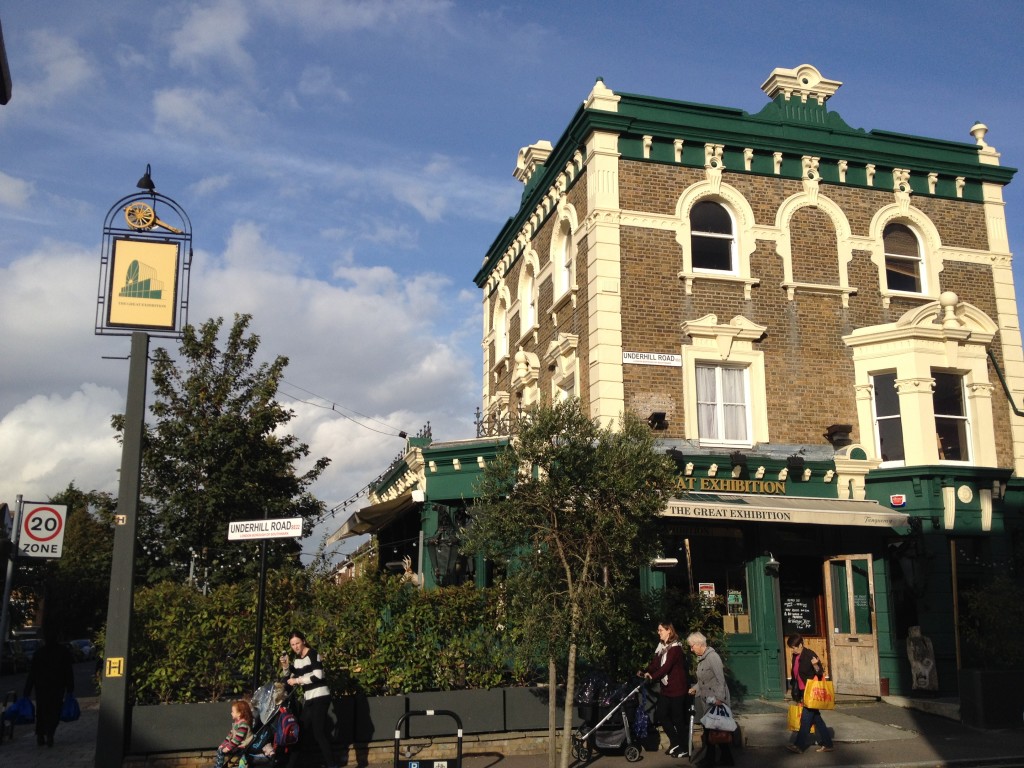 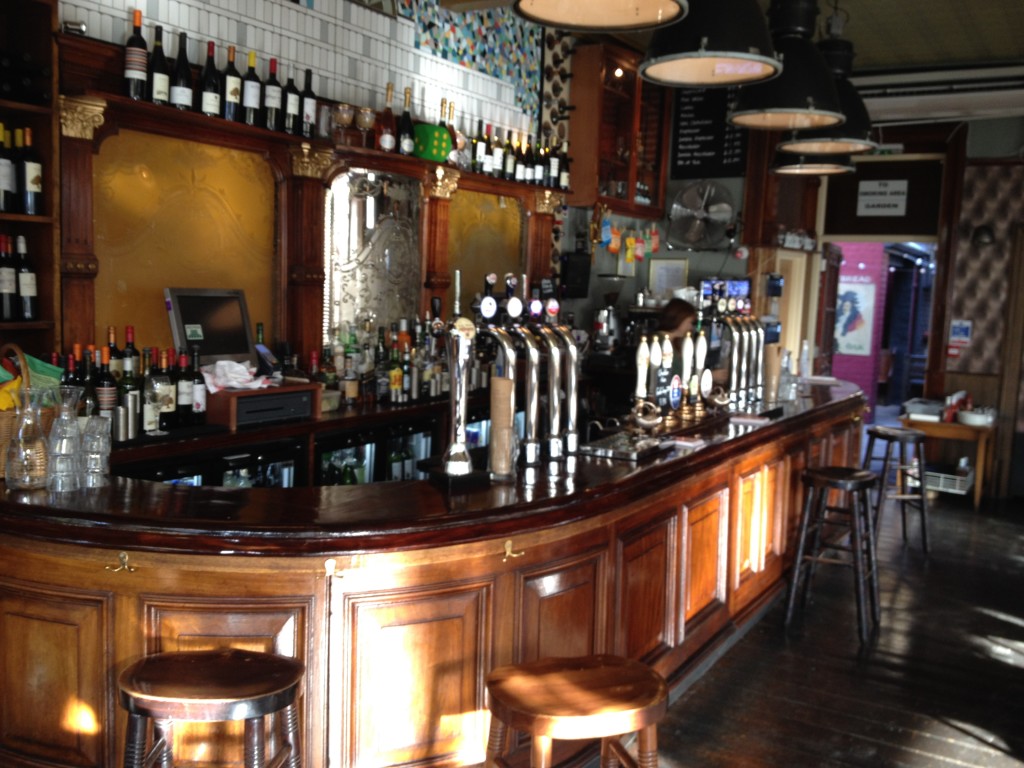 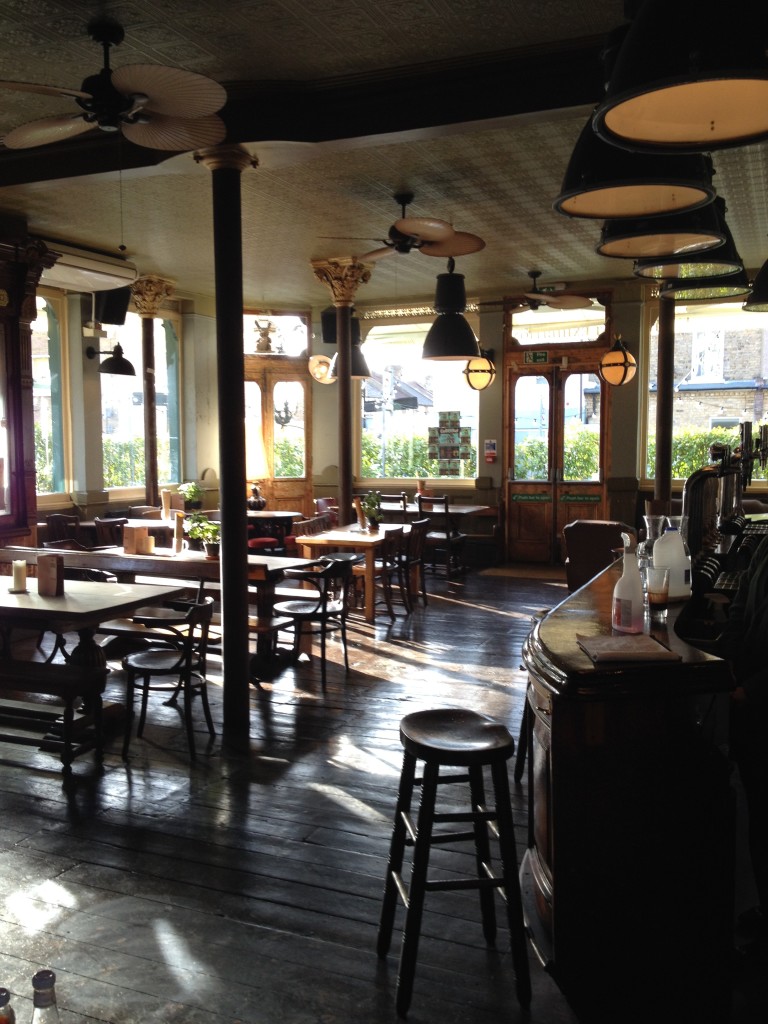 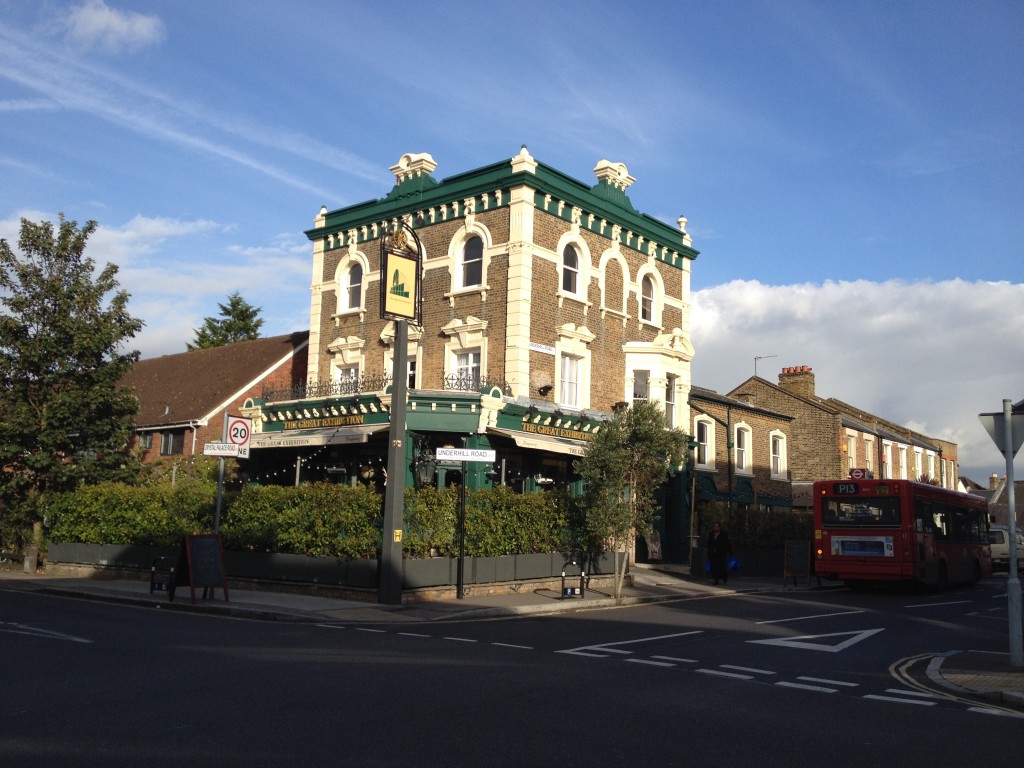 These photos are courtesy of Freddie Harris, The Great Exhibition (Crystal Palace Tavern) 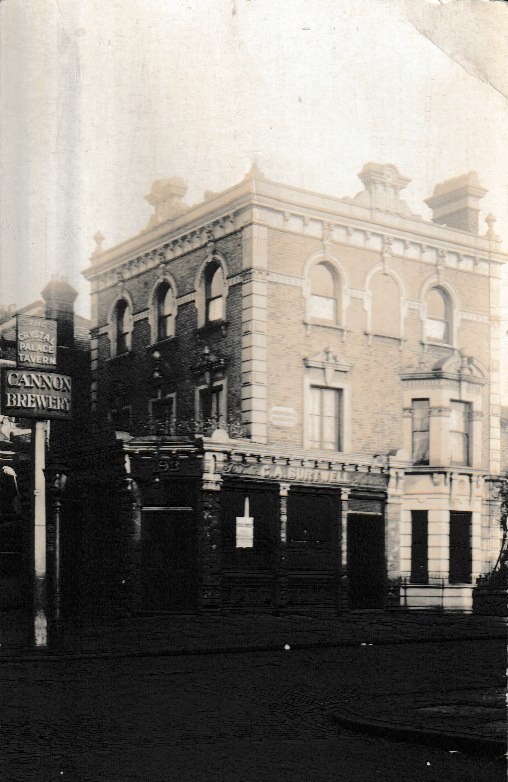 The Crystal Palace Tavern prior to any modern make overs. 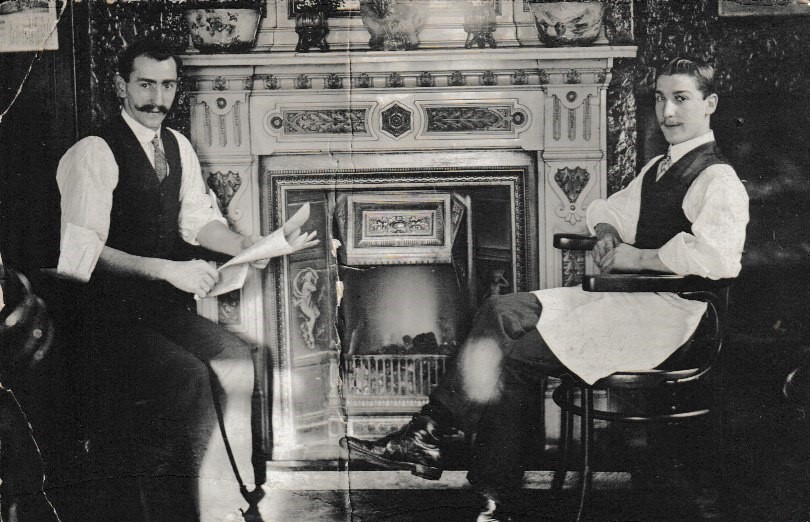 This is George Cooper, licensee of the CPT, on the left, but not sure who the other person is, possibly a barman. This was taken in the bar of the CPT.  George was born 1886. 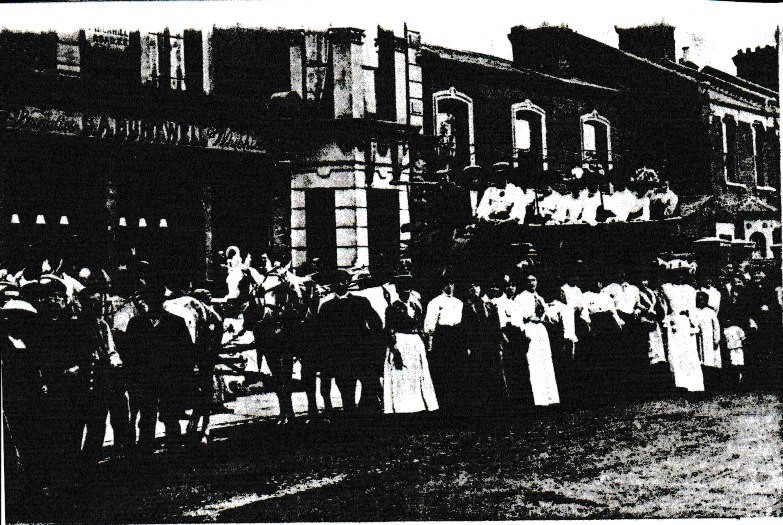 This was taken outside the Crystal Palace Tavern (to use it’s then name) and has the then owners name on the pub (Burtwell) I assume around the 1920’s or 30’s. 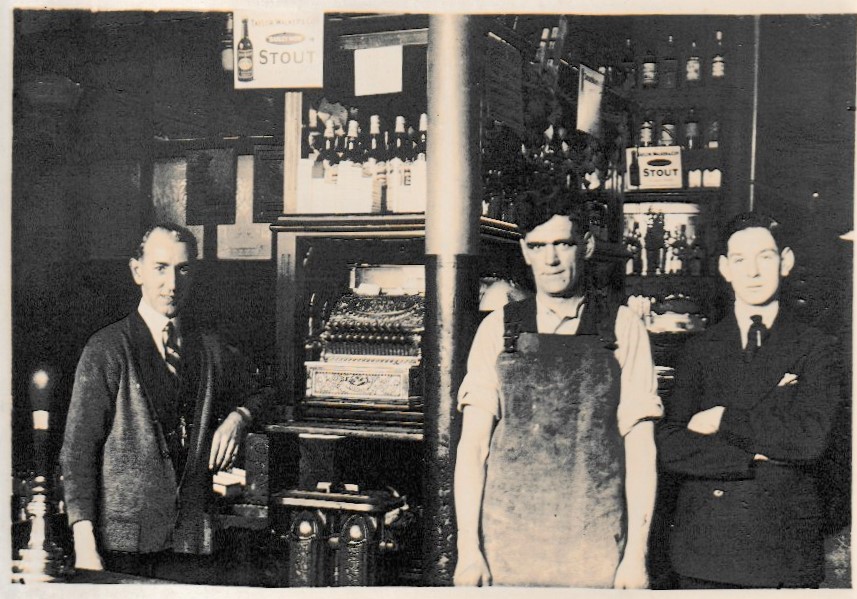 George Cooper again on the left with a barman and on the right a member of the Freathy family, George’s wife Caroline family name.  George and Caroline were very popular in the area. 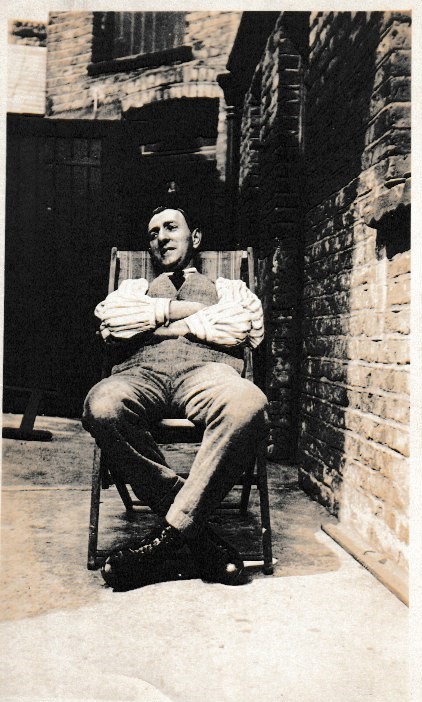 Another one of George Cooper sitting in the yard  of the CPT next to what used to be the stables and during the war became an Air Raid Warden station. 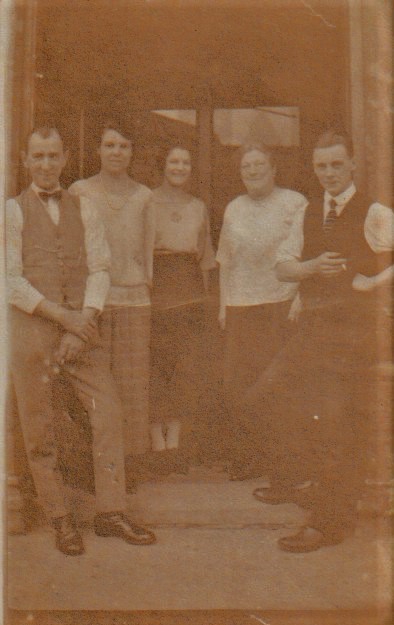 Taken outside the Tavern with George Cooper, Caroline Cooper then Annie Freathy.  No names for the two on the right.

Link below to East Dulwich Pubs 1944 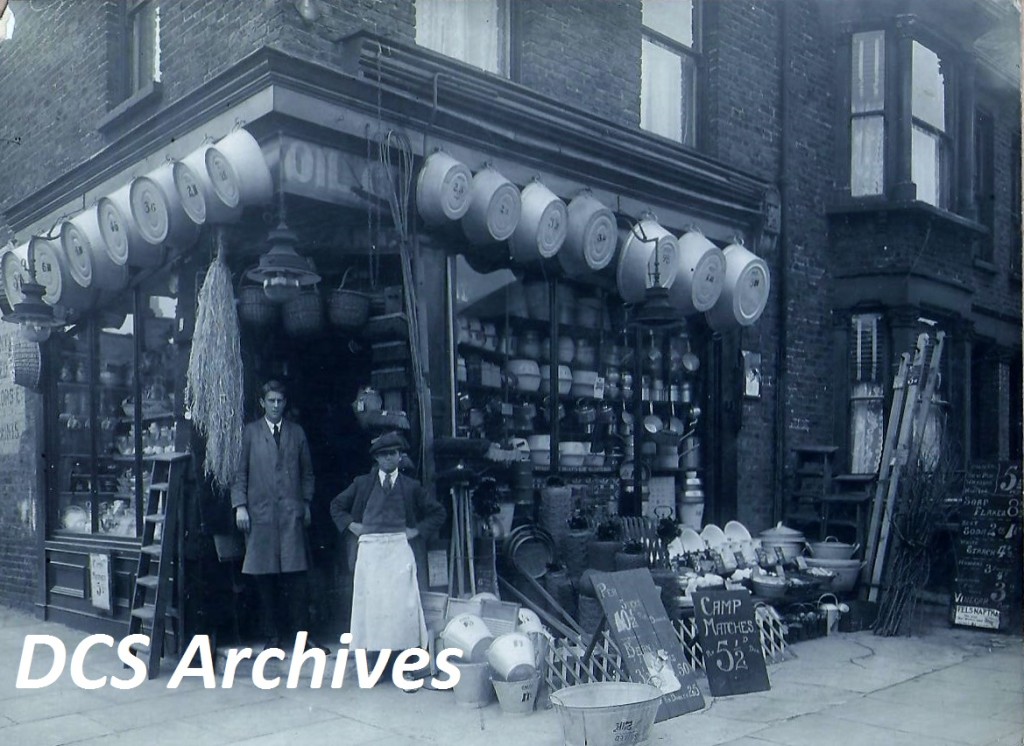 Hardware shop in Pellatt / Landcroft road, possibly 1930s/40s, The fella with the cap and white apron on was Tommy North, Carol Seymour’s Dad’s Brother, At the time of this photo he was 13 years old but sadly died 6 to 7 years later from rheumatic fever. The only other thing I can say about the shop is that it had a 500 gallon tank of paraffin behind the front door for customers to fill there gallon cans for heating at home, no health and safety then. 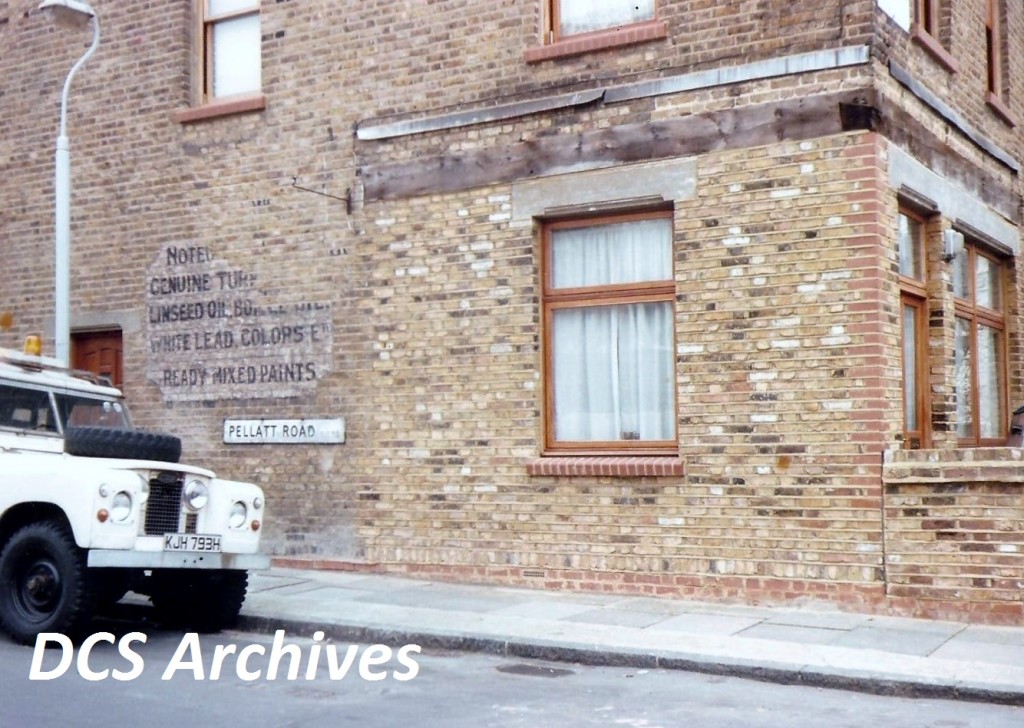 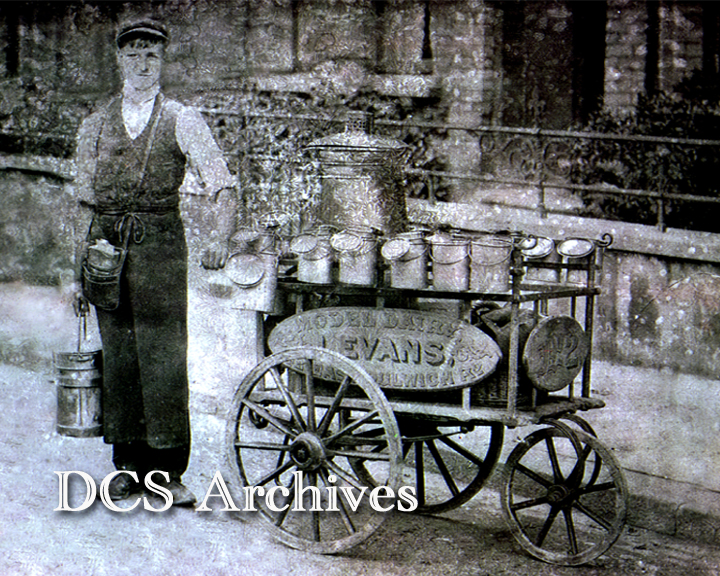 The Milkman in the above photo is about 18 years old. He was born in 1889 and was Carol Seymour’s Grandad. His name was Leonard Henry North. The photo was probably taken outside 187 Landells Road in the early 1900s, where he lived with his parents. The house was in the North family from 1891 – 1987. The Dairy he worked for was Evans Dairy situated on the junction of Glengary Road and East Dulwich Grove, opposite Dulwich Hospital.

(below is an extract from the 1964 Kellys Directory) 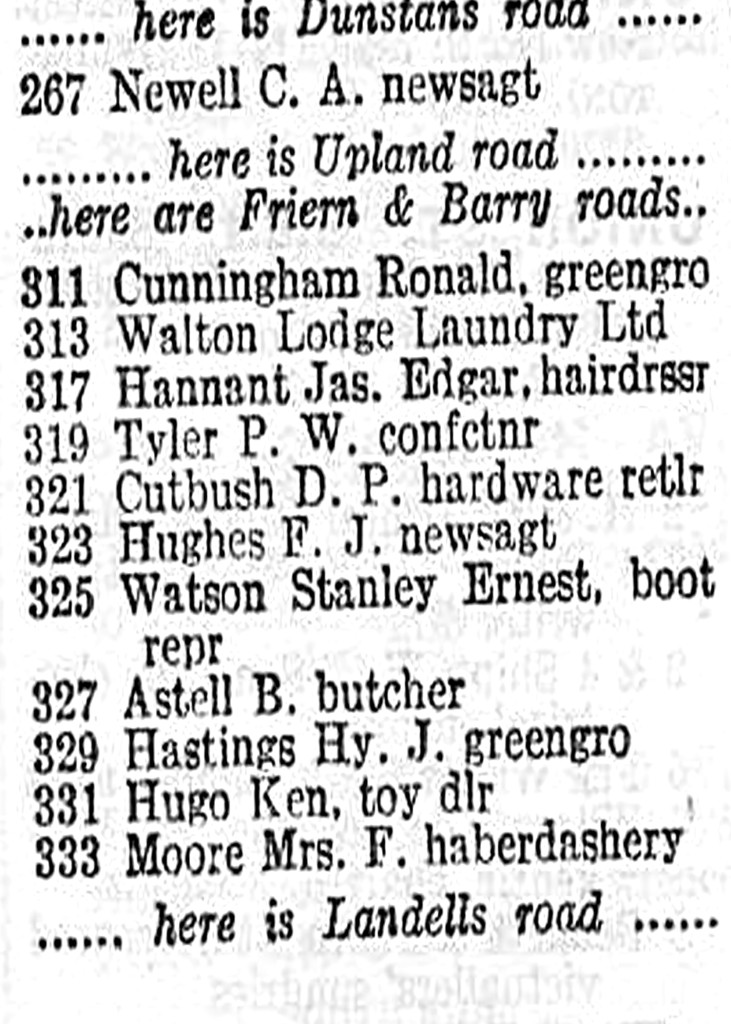 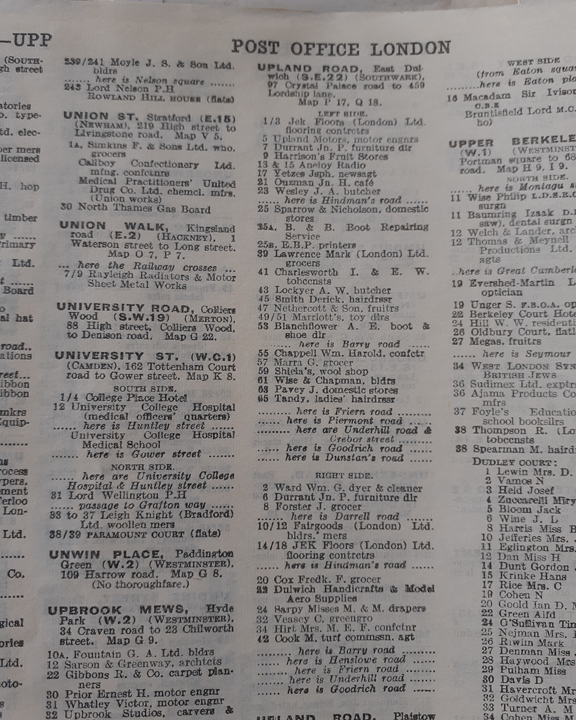 The Origins of Place Bakeries in Dulwich by Mary Smith

My Nan was born in Shap in Cumbria around the turn of the century with the name of Bland.  The family all called her Sissy so I suppose her name was Cecilia or something close to that.  She married into the Place family when she married my Grandad and although he was a Yorkshireman from Barnoldswick, near Colne, they all moved to Blackpool where they had a guest house.  I remember my Dad telling me that as he grew up that if they could take in another guest then he would have to give up his bedroom for them as it meant extra income for the family.

Nan was the entrepreneur but times were hard.  Dad’s sister Annie was close in age to him and they were all brought up with a strong work ethic.  Grandad’s sister had married a Frenchman, Charles, a baker who also lived in Blackpool and they had a son Jeff so Jeff, Dad and Annie grew up as friends.  They somehow got hold of a film projector and would show films to all the local children in a shed and charge them an entrance fee.  Ten years after my Dad, John (but known as Jock) and Annie were born along came my uncle, Lionel who is still fit and well today.  As children Dad and Annie looked after him while Nan was working hard and obviously led him into all sorts of mischief.

Well before the second WW started Uncle Charles had moved to East Dulwich in London to start up a bakery business.  He encouraged the rest of the family to move down too.  They rented a shop in Lordship Lane which had a bakery oven in the cellar.  They bought bread from Charles and later rented another shop further up the parade where they also lived opposite ‘The Plough’ pub.   In the 2nd WW this shop was bombed so they all moved out to live in a large house opposite where several other families had been housed.  After the end of the war they bought the bombed site where the shop was and had it rebuilt with a large bakehouse at the rear.  There was also a space for afternoon teas to be served.  My Nan and Grandad lived in a large maisonette above this shop which became the head office of Place Bakeries.

My Nan ran a small grocery shop in the original rented shop and eventually bought the freehold.  She was well thought of by all her customers.  She had a heart of gold and would always see that those families who were hard up got little extras in their order, which they didn’t have to pay for.  She was also a very unwell lady who had had a lung removed – a huge operation in those days and had to survive with dreadful scarring which never healed properly.  She needed oxygen support on bad days all the time I was aware of her.  She didn’t make old bones, always looked very old to me and died when she was in her early 60s.  I loved her lots obviously.  My twin brother and I were the apples of her eye and she always told us that she would take the top brick off the chimney if we wanted it.  I didn’t see the attraction of a brick luckily.

Everything was going well so she negotiated a loan from the bank – apparently she was good at twisting the bank manager’s arm – to buy the bakery at the bottom end of Lordship Lane with a shop at the front from Uncle Charles.  They hired bakers to work for them and the bread was lovely – ‘the crust with the crackle’ was the logo and it was too!  Cakes, buns etc were made at the bakehouse opposite ‘The Plough’ pub.

Dad had qualified as an engineer and Lionel and him had started a factory making pushchairs before and after the war.  Dad’s eyesight was not good enough for the war effort and Lionel was too young so they both managed to miss active service.  Later Lionel became the manager of all the shops they had acquired, delivering all the goods to them and sorting out the problems and Dad would deliver bread with Lionel at 5am and then go to his day job as an engineer for the government.  He calculated all the wages, tax etc in the evenings.  I always remember him working.  It’s ironic that neither him nor Lionel could bake bread; in fact my Dad struggled to boil an egg!

The business was sold to the employees around the 70s as a going concern but whether they weren’t prepared to work as hard as Lionel and Dad or whether the opening of supermarkets which sold everything was their downfall, I don’t know.  I suspect the supermarkets with their cheap, tasteless, doughy bread were to blame but people got cheaper food and maybe couldn’t afford the crust with the crackle any more.  Place Bakeries is no more but remembered by many.  I still hate supermarket bread and always look for rustic bakers to buy from.  I hope the tide is turning as people realise the difference in taste.

Recently I decided to turn a lot of old slide photos into digital form.  Mostly I did people but found these 2 that were taken in Dulwich Park – the handcart and the other was at the exit of the park into the village.  It was a procession to commemorate something in the 60s but I have no idea what it was.  My Dad and Lionel his brother decided it would be good to paint up the old cart with the Place Bakeries logo and one of the lads from the bakery called Brian would haul it through the procession.  It looked quite grand.
Dad and Lionel had an adopted auntie who married a signwriter called Jack Wiltshire.  I found it fascinating watching him work on the vans with a hand steadier – a stick with a padded end and his soft, long bristled paint brushes as they curled around the shapes of all the letters.  It really was a skilled job.  I also remember his old van which was covered in paints of different colours where he had tried them out, spillages in the inside and the way it bounced up and down the unmade road (Mount Adon Park) at the back of us because the shock absorbers had long gone! 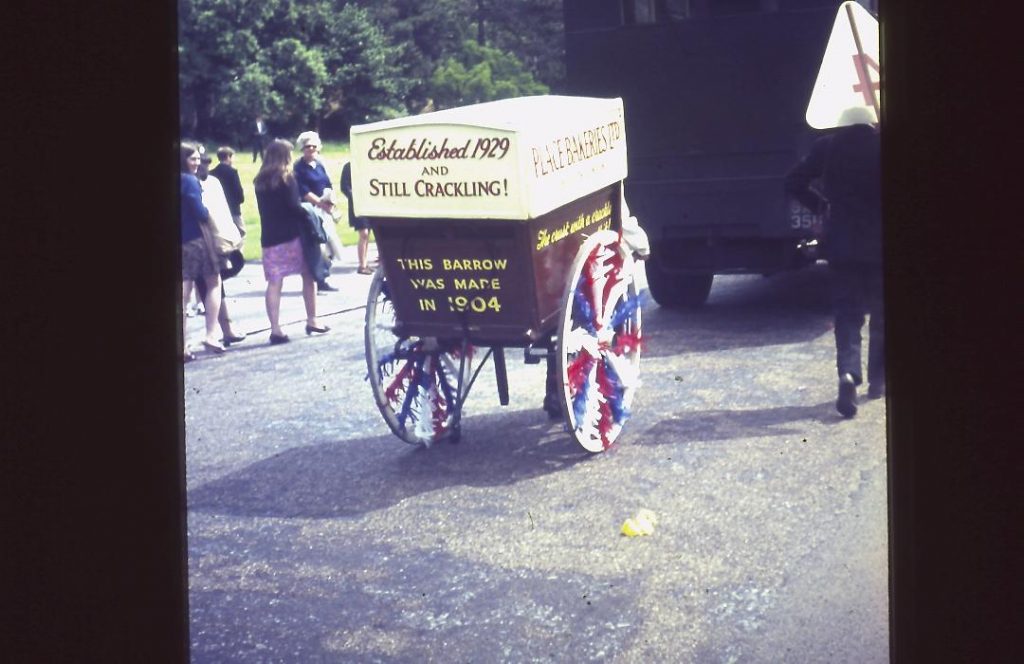 These photos were taken at the Dulwich Millennium Celebrations, June 1967. 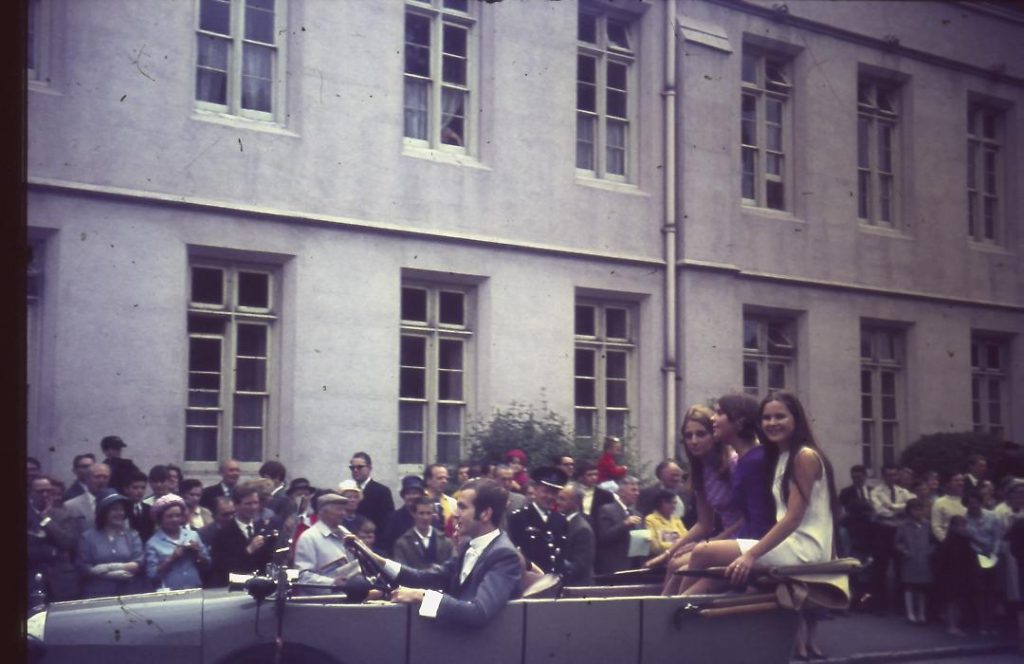